From as far back as the middle of the last century, surfers have had a soft spot for Bali, egged on by some Yankee dude named Bob, who allegedly smashed the first waves at Kuta Beach in the mid 1930’s. 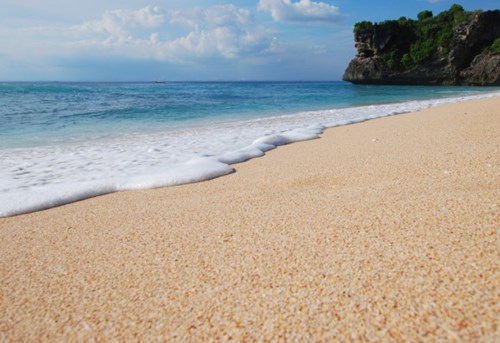 Since then, much of the Indonesian coastline has been ‘surf scoured’, however even today, wax heads are continuing to yield new discoveries. And Bali’s popularity is a no-brainer – epic waves are on offer here almost every day of the year. In the wet season when the winds change direction and things mellow a bit, the east coast can be a mighty fine option, with the west coast and Bukit Peninsula the place to be in the dry season, when the bigger swells hit.

So whether you’re a newbie ticking off a bucket list whim, a semi-pro hoping to score a barrel or two, or an experienced dude (or dudette) amped to test the air at one of Bali’s legendary spots, here is where it’s firing people!

Kuta Beach is probably the most popular choice for many first timers wanting to get their cowabunga on, as it offers a long sandy stretch with mellow, consistent sets of up to a metre high. Its soft tide ensures heaps of white water to practice on, with plenty of lifeguards on patrol if you get into trouble, which can often happen with the strong undertow and the bigger currents that surface later on in the afternoon. 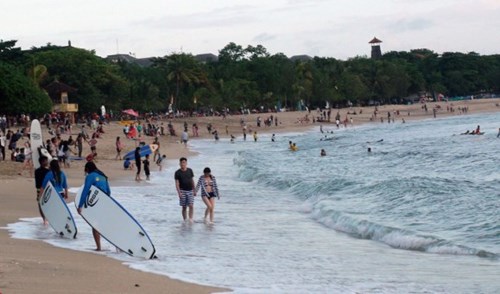 Bordering Kuta to the north, Legian Beach offers a variety of gentler sets with a sandy break and (like Kuta) swells that grow bigger as the day wears on. This spot’s also ideal for those needing a bit of tuition, as it’s home to a truckload of board hirers and a number of notable surf schools.

North of Legian you’ll find Seminyak Beach, a white-grey sandy strip that offers plenty of swell, short lengths and a combination of lefts and rights, and if you keep heading northwest, you’ll find Pantai Batu Bolong (named after the temple of the same name). Affectionately known by expat surfers as ‘Echo Beach’, its small, rocky crags hide a stunning coastline and consistent swells present a perfect practice area for learners. 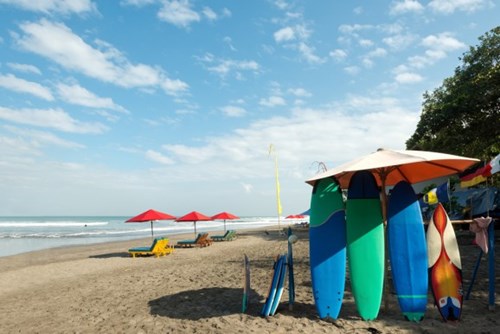 For those with a bit more experience, Balangan (which is southwest of Kuta) is a surfer’s paradise with its kilometre-long stretch of sun-bleached beach. Southern swells guarantee long left-handers ranging from four to six feet and a beachfront reef that will keep capable ones on their (bootie clad) toes.

Canggu Beach (on the west coast, about 30 minutes from Kuta) features a mix of beach and reef breaks and waves that are generally soft. However, things can get rather zippy once the tide is up, allowing for a few rippable peaks if your nerves are up to it.

Offering one of the longest left hand waves in Bali, Medewi is a two-hour drive southwest of Denpasar (meaning less crowds) and situated on a stunning rocky beach, renowned for its long left-handers and razor-sharp reef (clearly for experienced ones only). 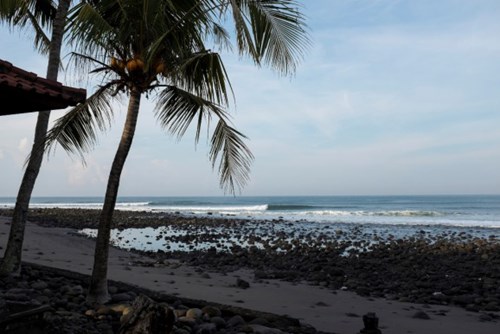 Head northeast, and as you pass Sanur you’ll find a once-secret hideaway that is now one of the most popular surf spots in Bali. Offering an excellent reef break, Keramas has constant waves and a big swell first up (forget it after 7am). Later, onshore winds will definitely affect things and not-so-confident ones should watch an end section that gets shallow and unearths a notoriously sharp reef.

Uluwatu on Bali’s southwest tip is a somewhat mystical experience, located in the shadow of one of Bali’s most famous temples. Where else on earth could you sit in the line up, post-barrel, and view an ancient Hindu shrine perched precariously on a craggy cliff face? The legendary breaks are technical and advanced here, with The Peak in front of the temple’s cave offering the most consistent rides. Reef action is the go here, so be prepared with booties and a decent leash. 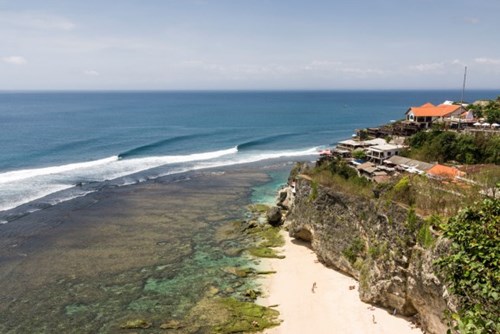 Further north, you’ll find Suluban (which translates as ‘to crouch under’), a unique stretch of narrow beach accessible only by the negotiation of a narrow cave. Granting experienced surfers long and powerful swells, an endless barrage of barrels makes it a prime spot for a mullering of the highest order.

Padang-Padang (nicknamed the Balinese Pipeline) is situated on the Bukit Peninsula and comprises a crazy left hand point strictly for professional surfers. Waves here range from four to 12 feet and offer consistent barrels, long tube rides and a sharp exit onto the arse end of the reef if you’re not careful. 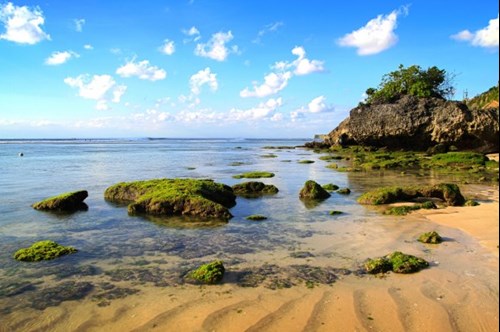 A famously long reef located between Bingin and Padang Padang, the Impossibles was once an intimidating break urging only the most experienced to conquer its swells (hence the name). It’s still fairly freaky today, offering three to five-foot super-fast waves that will (in perfect conditions) allow you a ride all the way to Bingin, which is over a kilometre away. Three distinct take off zones are beautifully complimented by a breathtaking beach panorama with a backdrop of stunning rock formations.

Simply accessing the Green Bowl is an adventure – you’ll find it located hundreds of steps down a cliff face on a secluded beach on the southernmost tip of the island. Also referred to as Green Balls (perhaps because you need them), this area has consistent swells due to unpredictable southern currents, and a uniquely shaped (and beautifully hued) ocean floor, which is visible during low tide.

Further out on the island’s eastern coast is the Keramas surf break, renowned for swells that surge and break over an uneven lava reef. Offering mostly hollow right-handers that average around five feet, here you can take advantage of some of Bali’s most famous waves amid stunning sunset views.

And if you’re prepared to do a little work for your waves, take a boat trip out to Nusa Lembongan, a small island southeast of the Bali mainland. Here you’ll find the Shipwrecks, (aptly named after an unfortunate grounding on the island’s north western reefs) and Lacerations (ouch!), a spot worthy of the most skilled and strong-willed of barrel chasers. 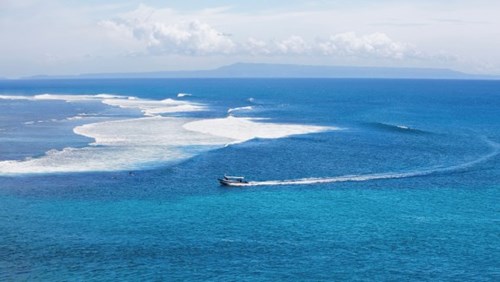 As the old saying goes … no pain, no gain! 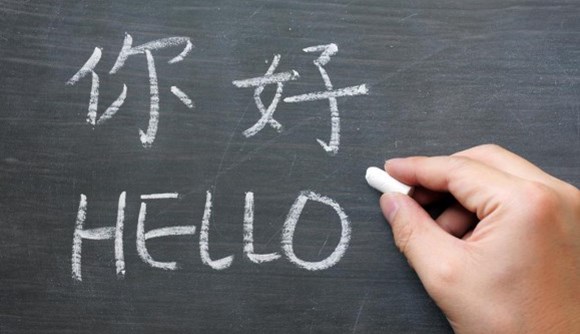 How to Learn Mandarin Overseas

Spoken by over a billion people and with more native speakers than any other language, Mandarin Chinese is als… 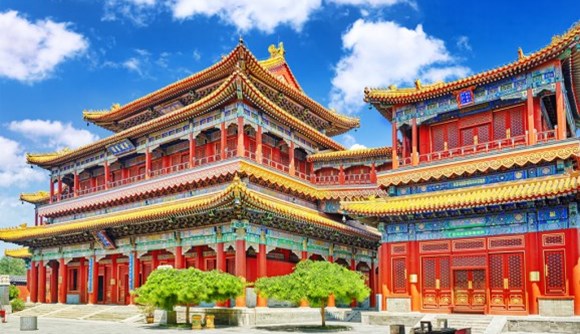 Cheapo (even free!) things to do in Beijing!

Watching your yuan when you visit Beijing? This complex, compelling city has a surprise around every corner fo…