Cheapo (even free!) things to do in Beijing!

Watching your yuan when you visit Beijing? This complex, compelling city has a surprise around every corner for affluent cash splashers and penny pinchers alike. If you’re an art critic, science nerd, antique hunter or Tai Chi aficionado, this city will welcome you with open arms. 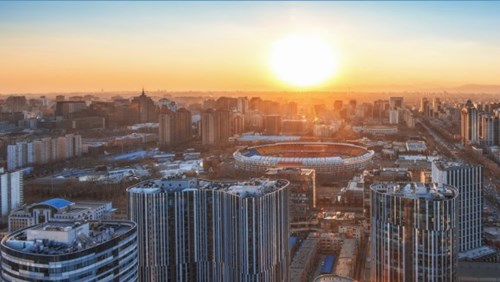 Renowned for its year-round, large-scale exhibitions, the National Museum of China features mind boggling historical delights including ancient Chinese currency, Buddhist sculptures and jade, bronze and porcelain art. A bonus? It’s free for tourists. Some of the more offbeat exhibitions are heralded as ‘The Jar Showing a Stork with a Fish’ and ‘The Painted Pottery Basin with Human Face and Fish Design’! . 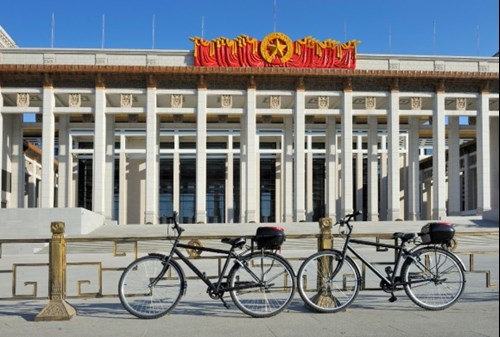 If you’re a science nerd, you may get a little freaky over the Beijing Museum of Natural History. Encompassing the fields of zoology, anthropology, botany and palaeontology (hello, dinosaurs!), it houses over a hundred thousand fossils and artefacts. Ranked number two in the world in terms of its number of complete ancient mammals, it’s most famous resident is Stegodon Zdanskyi (a kind of ancient elephant). The museum is free year-round, but you’ll need to reserve tickets.

Fancy a bit of theatre, darling? If you’re a fan of board treading, you’ll love the Beijing Theater Museum. Built during the Ming and Qing dynasties, its exhibits include OTT memorabilia (including divine costumes), subtly housed within ancient Chinese architecture, illustrating the historical development of the Peking opera.

If arty-type stuff is more your style, head to the 798 Art Zone, a higgle-dee-piggle-dee collection of galleries, public installations and left-field boutiques, set inside an atmospheric expanse of disused factories. The complex celebrates art both old and new, from the country’s proletarian roots of the 1950’s to the modernism of the current art scene. 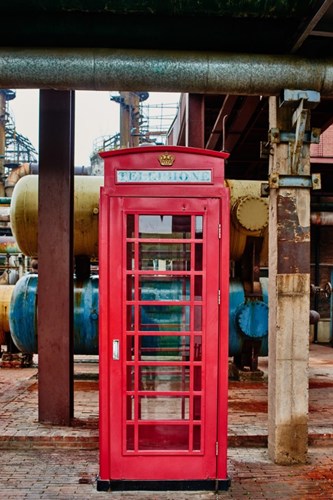 For an authentic taste of Chinese life, make your way to one of the city’s oldest parks (it dates back to 1530), where you can quietly contemplate your touristy adventures beside a fish-filled pond, indulge in a game of local Mahjong or stroll its vastness for a glimpse of sword fighters, kite flyers and Tai Chi aficionados. Feeling energetic? Ritan Park also has an outdoor gym and climbing wall (apparently a favourite with Chinese pensioners) or partake in a brisk stroll for a glimpse of the Bird’s Nest and the Water Cube, two architecturally intriguing remnants of the 2008 Beijing Olympics. 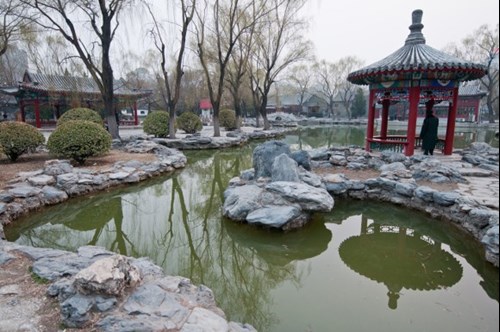 Houhai Lake, located North of the Forbidden City offers an awesome opportunity for a refreshing dip on a stinking hot day or hire a pedalo (a small ‘pleasure boat’) for a scenic tour, then follow it up with a crisp Tsingtao beer at one of the nearby rooftop bars. Come winter, grab a piece of the icy action by sampling a range of slick-negotiating contraptions, including electric-powered dodgem cars, ice bikes, chair sleds or try the classic, old-school option – a pair of ice skates. 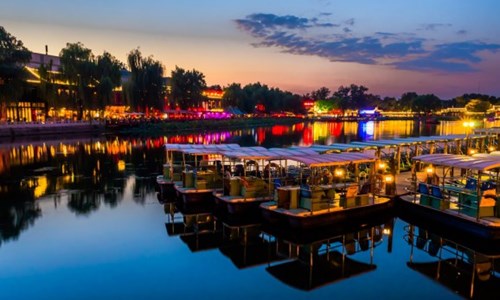 Undoubtedly one of Beijing’s most iconic sights and a must-see, Tiananmen Square is the world’s largest public square. A people watcher’s paradise, it’s worth braving the crowds at sunrise or sunset for the pomp and ceremony of the raising and lowering of the national flag. Pay your respects to Chairman Mao in the memorial hall and view the Gate of Heavenly Peace, where Mao Zedong founded the People’s Republic of China in 1949. 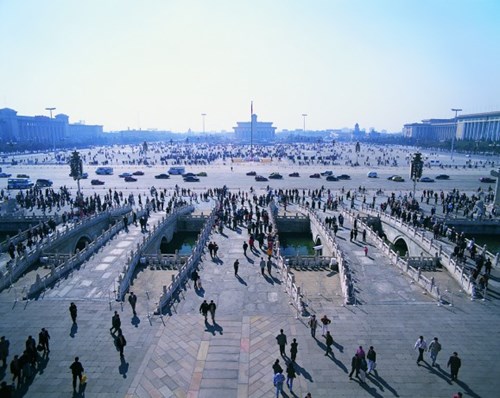 Then head to Monument to the People’s Heroes, a ten-storey obelisk erected to commemorate the 19th century struggles of the revolutionary martyrs and while you’re there, spare a quiet thought for those who lost their lives during the Tiananmen Square protests in 1989 (as public commemoration of this event is officially banned). 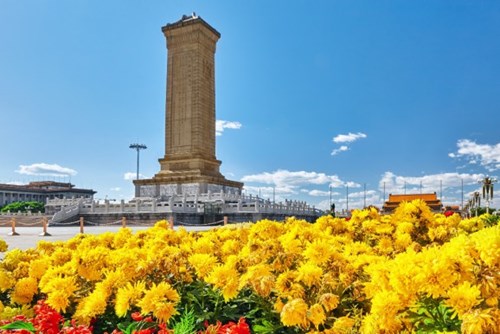 Monument to the People’s Heroes

Walking north from Tiananmen Square, you’ll find the gargantuan palace complex (the largest in the world) known colloquially as the Forbidden City, which is surrounded by a 52 metre-wide moat. Upon entering the Meridian Gate, you’ll enter a huge courtyard spanned by five beautiful marble bridges, which is your gateway to the magnificence of the Gate of Supreme Harmony. 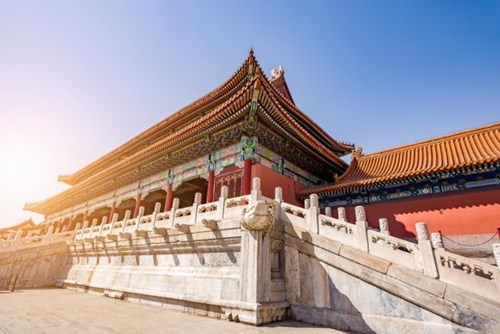 Pass through and you’ll come upon the Three Great Halls, raised on a three-tiered marble terrace. Check out the impressive Dragon Throne in the Hall of Supreme Harmony, before taking a much-need load off with a walk through the Imperial Garden, which features 7,000 square metres of exquisite landscaping showcasing a myriad of pavilions, rockeries and ancient cypress trees. 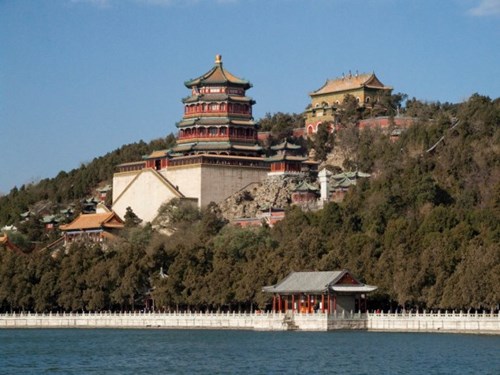 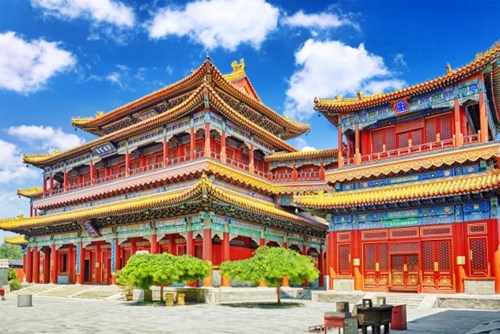 If you feel like a bit of look-but-don’t-buy shopping experience, stop off at the Silk Market, a 35,000 square metre complex housing 1,700 retailers over seven floors. Here you’ll find everything from electronics to jewellery and of course, level upon level of top name brand ’genuine imitations’. Ironically, the market’s namesake is only found on the 3rd floor and is probably one of the few genuine items available in the place. Or peruse the Pānjiāyuán Market in South East Beijing, for everything antique-y from calligraphy and revolutionary memorabilia to Buddha heads and Tibetan carpets.

Explore the offbeat side of Beijing (hiring a bike is the way to go) with a meandering pedal through the city’s historic hutongs. Alleyways spider through these traditional courtyard residences, where you’ll encounter restored architecture along Nanluoguxiang (near the Bell Towers) and in the area south of Tiananmen Square, you’ll encounter the narrowest alleyway in Beijing. If you’re after a pit-stop for souvenirs, head to Liulichang Culture Street, where you’ll find an array of paintings, porcelains and traditional mementoes. 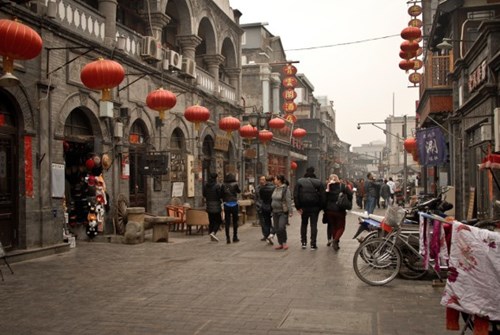 Need a spot of refreshment before heading home? Then pop into the largest tea market in northern China, Maliandao Tea Street, where you’ll find over 900 stalls selling all manner of leaf and paraphernalia. Green, jasmine, pu’er, oolong … the list goes on. 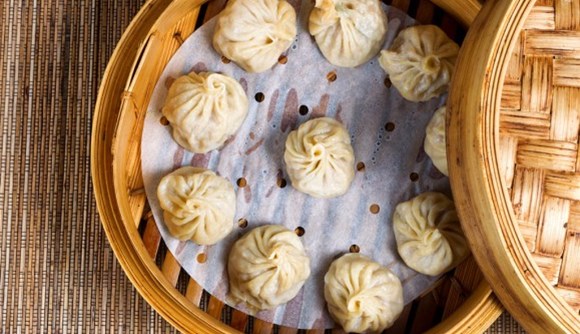 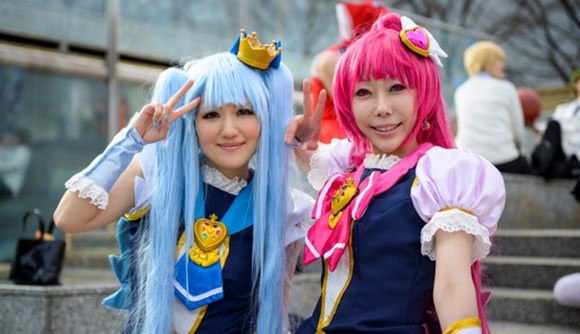