The first-timer’s guide to Munich

Munich in a nutshell?

Visualize a Bavarian metropolis overlaid with a rich and royal heritage, world-class galleries and museums, Mediterranean-style cafes and the odd Lederhosen-clad local. This is a town that offers a charming combination of high-tech and olde-worlde delights. 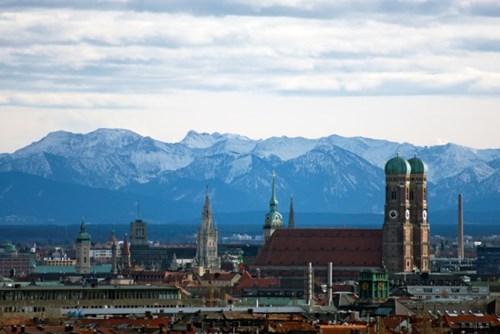 And of course, then there’s Oktoberfest …

Celebrated as the Munich’s numero uno attraction, the Residenzmuseum may look a little inconspicuous on the outside, but book an exploratory tour and you’ll discover a vast palace complex that was once home to the city’s rulers – the Wittelsbachs. With over 90 rooms open to the public at any given time, this is an art lover’s rabbit warren of the most breathtaking kind.

Kick off your tour-de-Munich with a peak at Grotto Court, home to the Perseus Fountain with its dripping Medusa’s head, before heading next door to the world-famous Antiquarium, a stunning hall whose Renaissance interior is smothered in frescos, and houses the family’s humongous antique collections. Upstairs, you’ll find a six-room rococo lover’s delight in the Rich Rooms and in the Ancestors Gallery, a collection of 121 portraits featuring famous Bavarian rulers.

Don’t miss the Royal Treasury with its impressive array of royal trinkets, the Reichekapelle with its 16th-century organ and the Residence Theater, which was painstakingly constructed in the 1700s and then masterfully restored after the carnage of World War Two.

Once known as the ‘largest museum in the world’ (when it opened in 1836), the Pinakothek Museum is a treasure trove of visual delights, and home to some of the former Royal Family’s most famous paintings. The Alte Pinakothek houses many of the Old Masters, while newer sections added in the 1980’s feature a range of artists from the 1800’s through to the post-1960’s contemporary era. 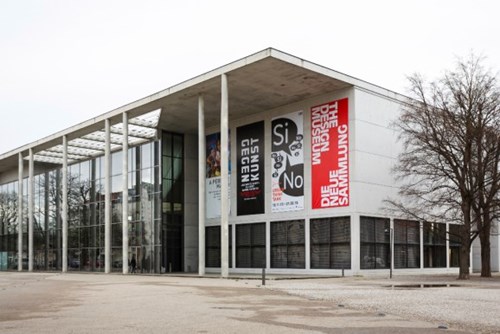 After a four-year reno (which included the construction of a new wing), the Lenbachhaus gallery re-opened in 2013 to rave reviews. Featuring a whirlwind of contemporary art, pieces by Gerhard Richter, Andy Warhol and the ground breaking modernist group, Der Blaue Reiter, abound here.

If you’re after a museum with a global twist, then head for the Museum Five Continents for views of one of the world’s most complete ethnological collections. This venue features a bonanza of stuff from far-off locales, including African sculptures, Peruvian ceramics and a mummified corpse or two. Or try the Bavarian State Archaeological Collection, for an insight into a range of cult objects from the Roman, Celtic and Prehistoric Stone Age periods.

Nerdy types will love the Deutsches Museum, the world’s largest technical-interactive museum of its type, where you can get up close and personal with around 28,000 exhibited objects from the fifty fields of science and technology (the artificial underground mines are also pretty cool). 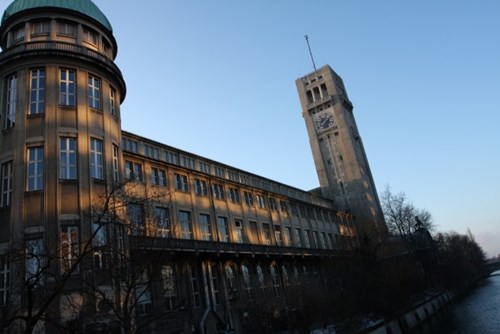 And for a bizarre-fest, visit the Museum of Hunting and Fishing which is located within the guts of a 13th-century church and houses an eclectic collection of taxidermy displays, including a prestigious antler collection and a range of mammalian-bird type monstrosities known as ‘wolpertingers’, which look like they’ve been torn straight from the (terrifying) pages of Bavarian folklore.

Just north of the Residenz, you’ll find a 28-hectare flora-filled oasis filled to the brim with formal flowerbeds, babbling waterways and 200-year old trees. This is the site of Hofgarten’s glorious greenery, an idyllic haven for ray-catching office workers, yummy mummies and gaggles of chatty nuns. 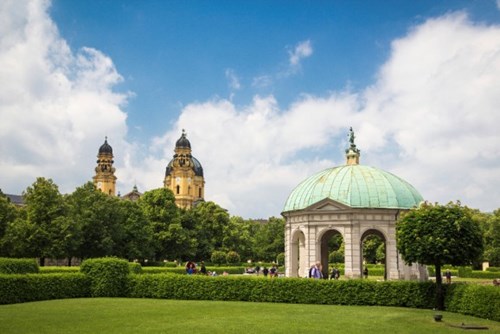 The city’s verdant New Botanical Gardens will satisfy green thumbs, boasting around 14,000 plant species from around the world (including in the tropical glass-framed palm house), and outdoor lovers will find the most entertaining of sunny spots at the sprawling English Garden. Rivaling London’s Hyde Park and New York’s Central Park in terms of size, this five-kilometre long playground is one of the best urban parks in the world. 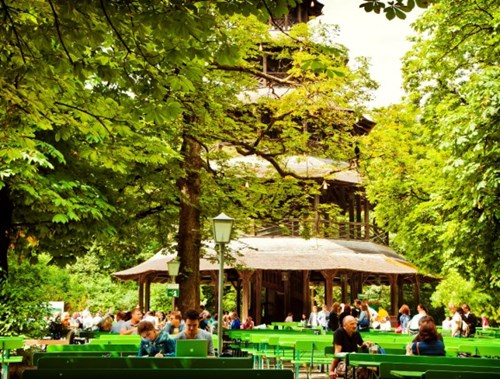 While the 6000-person Chinese Beer Garden may have you champing at the bit for a frothy ale, other notable attractions include the Eisbach River, where would-be wax heads tackle icy, artificial waves and the Beautiful Meadow, where nudie types can get their gear off without fear of reprisal (or arrest).

Those wanting to venture out of the city, should look at buying a Bayern Ticket (for the Deutsche Bahn’s high-speed train), which will have you day-tripping it to the likes of the Bavarian Forest where you can hike your way amid a tumble of spruce forests and sparkling lakes, or travel further out to the wonder of the Berchtesgaden National Park, a rock climbing paradise nestled scenically on the Austrian border. 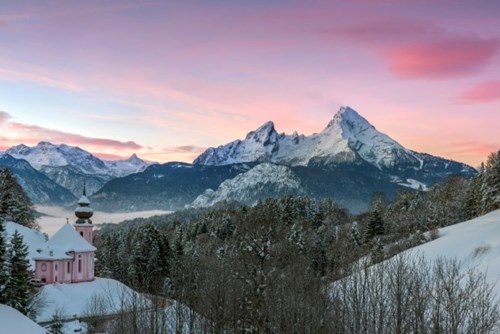 Pre-dating the city itself (a group of monks settled here in the 800’s), Saint Peter’s Church features stunning ceiling depictions of the man himself, as well as the gem-covered skeleton of Saint Munditia, a religious martyr ‘decorated’ in around 1675. Energetic ones should climb the 300-odd steps up the ‘Hill’ for amazing views of the city.

Still the heart and soul of the Old Town, the main square of Marienplatz is home to the vast New Town Hall, which is a football field-sized area with six courtyards and over 400 rooms. The highlight? It’s 85-metre-high clock, which unashamedly houses Germany’s largest glockenspiel, which covers two levels and is over eight metres tall.

For more grandeur, check out Nymphenburg Palace on Munich’s west side, which was built by the royal Wittelsbach family in 1664. Mural-filled salon rooms and the French formal gardens here will delight, as will the beautiful Hall of Mirrors and the Royal Hunting Lodge. 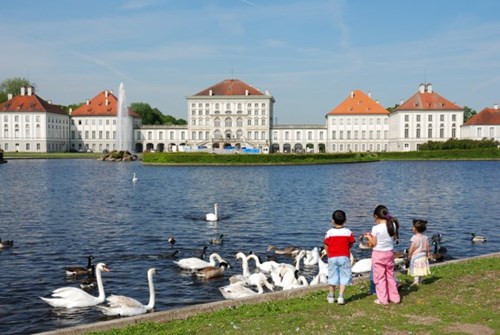 And don’t miss the Grand Hall for its OTT decorations including the ceiling which 76-year-old baroque artist, Johann Zimmermann, spent 10 months painting (on his back) and the Carriage House which has a breathtaking collection of gilded stage coaches (hello, Cinderella).

For photo-op views, visit the 291-metre high Olympiaturm (which was built for the 1972 Summer Olympics) or for a bit of sporty reminiscing, check out the Olympiastadion, the site of the 1974 FIFA World Cup (that the Germans (or West Germans at the time) won, of course).

Animal lovers can lock eyes with around 10,000 marine types at SeaLife, or for a bit more faunal variety, take a trip six kilometres south of the city centre, where you’ll find 500-odd furry, finned and feathered friends at the Tierpark Hellabrunn zoo.

If you like a bit of a public splash-about, try the public baths at the Müller´sches Volksbad, where you can bliss-out ‘Roman style’ (with or without your togs), or for a dip at one of the world’s largest sauna and spa centres, venture further north to the town of Erding for a salt-grotto experience. 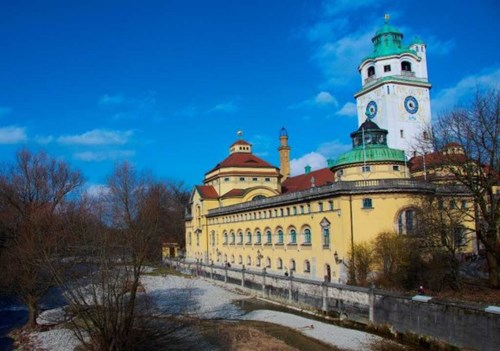 If you enjoy trawling through glitzy arcades, head to the Fünf Höfe for a bunch of high-end concept stores, or for a tastier option, visit the Victuals Markets for a smorgasbord of artisan cheeses, exotic olives and feast loads of truffles, hams and jams. Renowned as one of central Europe’s finest gourmet markets (and also affectionately known as the Stomach of the City), it has over 100 produce stands and a welcoming beer garden that features a beer-of-the-month for those after some refreshing time out.

Speaking of beer … clearly Germans have a penchant for it, and only the good stuff too, particularly as most brewers still follow the country’s 500-year-old Purity Law, which stipulates that the beverage may only contain water, malt, hops and alter yeast (until the law changed in 1987, that is!).

For a bit of brewing history, book a tour of the Oktoberfestmuseum or for a lazy afternoon session at a traditional beer hall, make your way to the Hofbrau Haus (one of Munich’s most famous) for a bit of old-school oompah music. 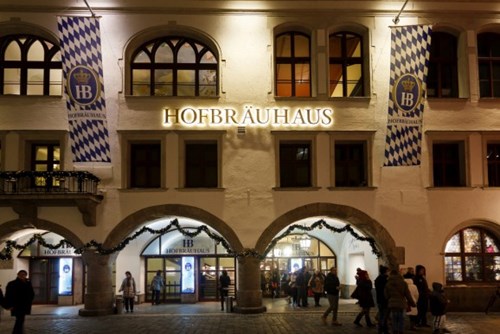 An alternative option is the locally loved Augustiner Keller, which is known for its Helles beer, brewed at one of Munich’s oldest breweries and founded by super-cool Augustinian monks in 1328.

And of course, then there’s Oktoberfest. A 16-day party that attracts over 6.4 million worldwide visitors a year, this super-spectacle is so must-do, it needs its own blog. 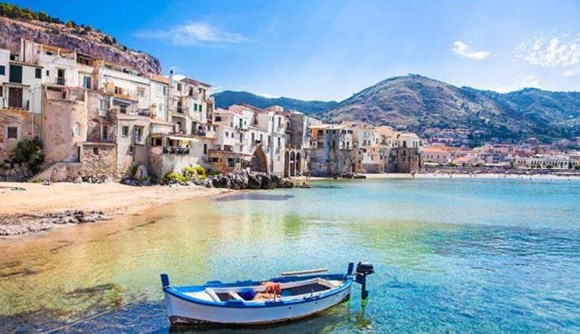 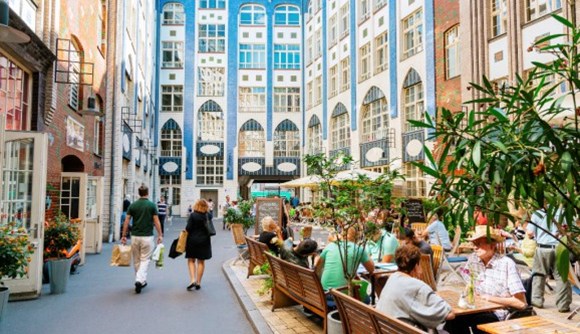