How to Avoid Food Poisoning when Travelling – Cook it, peel it, boil it or forget it!

It’s the catchphrase of many an adventurous gourmand who’s been (wisely) wary of chowing down on some foreign delicacies whilst flitting about the globe. You’re keen to sample the local cuisine, sure, but unfortunately just because your palate’s game, doesn’t mean your gut can handle it.

Salmonellosis , E. coli, norovirus … they’re all waiting to make a comfy little haven of your interiors, before making a violent exit (back or front, they’re not fussy) when you least expect it. Here’s a rundown (oops) on how to avoid Bali Belly, the Rangoon Runs and Montezuma’s Revenge (just to name a few).

Why things get nasty

Contamination (like a true party pig) loves to share the fun, and it does so in a variety of ways.  Food can be contaminated at the source – shellfish harvested from polluted water, unpasteurized dairy products milked from sick cattle and uncooked vegetables contaminated via, let’s just say, ‘unsavoury’ soil.

It can also happen from poor handling (if salads are rinsed with polluted water), from bacterial growth (if foods are allowed to sit unrefrigerated) and from parasitic larvae hanging out in the flesh of animals (I know, sounds just awesome). 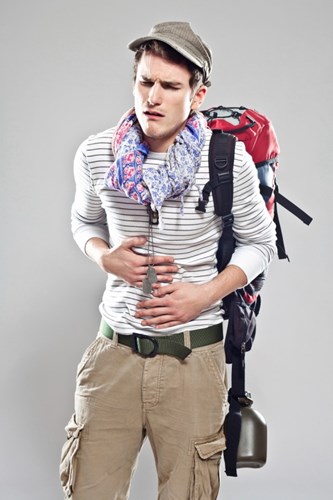 But there are a few basic rules you can follow that will help make your OS Festival of Fun a far more appetising affair. Be aware of who’s handling your eats – accepting a kebab from a sneezing, gum-chewing grot with filthy hands is probably a bad idea.

Don’t eat anything that’s been air-baking for any length of time (ie. beware the buffet!), if you’re heating stuff up, heat the crap out of it (uneven heating won’t kill surface bacteria) and (sounds banal) but eat your hot foods hot and your cold foods cold.

And for god’s sake, wash your hands WELL and a LOT. If water’s a bit scarce, grab some antibacterial wipes and smash anything and everything with ‘em.

The runs down on food..

Generally speaking, dry foods (like bread) or sealed, packaged foods that haven’t been opened (like canned tuna and crackers) are generally AOK, as most germs need moisture to thrive. Freshly cooked (fried, steamed, boiled) stuff’s fine, particularly if you’ve cooked it yourself. And make sure you’re eating it from clean crockery and with clean cutlery (consider packing your own – camping stores have great portable versions).

Meat should be cooked well done without any pink bits and fish should be thoroughly cleaned and recently cooked (not re-warmed). Steer clear of raw fish like Japanese sushi and Peruvian cerviche, even if marinated or ‘cooked’ with citrus, vinegar or other acidic liquid. And avoid mud crabs, mussels, clams and oysters if you want to be super careful. 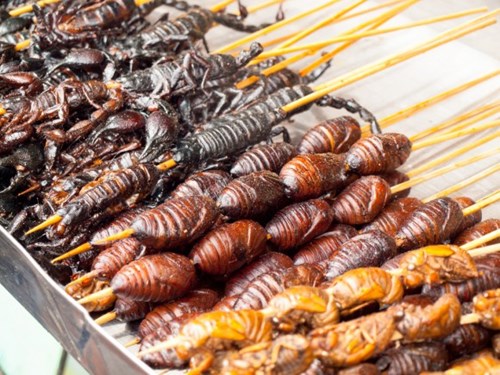 Try and eat only peelable varieties with un-punctured skins or wash them really, really well in ‘safe’ water. Steer clear of raw fruit and veg, especially in leafy salads, fruit platters, salad sandwiches and things like fresh salsas. And totally ignore aquatic plants (like water chestnuts) and anything raw that grows at ground level (like strawberries and lettuce), as nasties love to go commando in soil and may still be hiding out in what you’re about to eat. 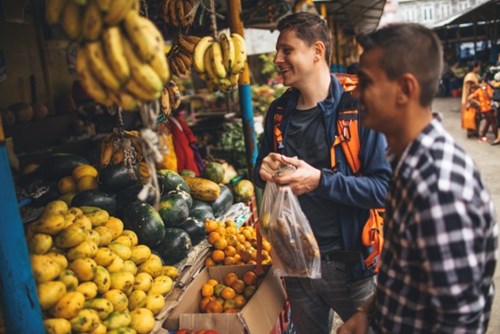 Get your dairy fix from products that come from large, commercial businesses in cans or sealed bottles and avoid unpasteurised dairy products, including yoghurt and cheese, milk in open containers (like pitchers), products that may have been sitting out at room temperature and foods that have been frozen and then been re-frozen (like ice cream).

If you’re going to eat eggs, order hard-boiled numbers served in their shell (better still, boil them yourself). Sunny side up and ‘soft’ scrambled scream Salmonella, so don’t even go there. 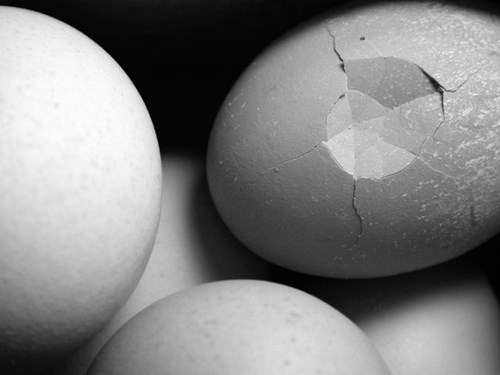 Watch ‘bits and pieces’ meals like fried rice, as they often contain meat that’s been hanging around for a bit (literally) and then flash fried. Leftovers are a healthy gut’s worst nightmare, because they’ve probably been accumulating bacteria from a number of different sources for who knows how long. And swerve that dollop of sauce (or mayo or dressing) on top, unless it comes freshly squeezed from a sealed package.

Street food is renowned (and often unfairly) as a little on the dodgy side, however if you choose food that’s been boiled, steamed, cooked or grilled directly in front of you and it’s fresh and steaming hot, it should be fine. Choose something that requires little handling and make sure it’s served in a clean container. Line-ups (particularly of locals) is also a good sign and pay attention to local mealtimes. If you eat when turnover’s high, you’re more likely to get food that’s uber-fresh. 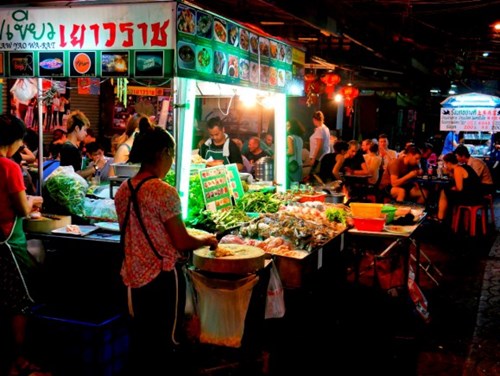 If you’re splurging on a restaurant meal, ask for recommendations from your tour guide, hostel manager or a friendly local and, once again, go with the people flow. If a restaurant’s busy, it will typically serve fresh, tasty food. And check out its surrounds – if the place looks clean, relatively fly-less and there’s no overflowing rubbish bins impeding the entrance, then all is well in the world of foreign flavours.

Be wary of beverages

Consider all surface water supplies (like streams, ponds, wells) unsafe to drink and be wary of tap water in less developed countries, although it’s best to err on the safe side wherever you go and bypassing the shower gargling if you can. Boiling water is the traditional standard of purification and will eliminate bacteria, parasites like giardia and viruses like gastroenteritis.

The bottled water route is probably the most practical, but you’ll need to check that seals are unbroken, as sneaky tap refills by pesky troublemakers are commonplace. Use for oral health activities as well (teeth brushing) and watch the “I’ll have a (insert poison) on the rocks, thanks” scenario – it’s a sneaky squirt causer. 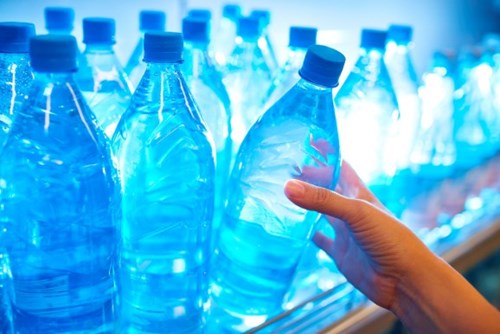 Hot coffee and tea are generally safe (although watch the milk), as are carbonated drinks, however ‘fountain drinks’ (carbonated water flavoured with syrup) are iffy, as are freshly squeezed juices.

But there’s no need to be totally food freaky when you’re away, as local cuisine is not necessarily ‘safer’ than what you find abroad – it may just be that you’re not used to it. Pay heed to these wholesome tips dear travellers, check out the World Health Organization’s website for informative updates and you’ll well and truly avoid a crappy time. 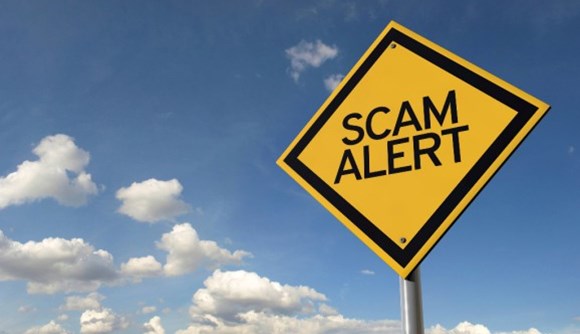 How to scam the travel scammer!

The ATM Assistant, the Mess Take and the Here, Catch My Baby! Just a few of the tools of the trade meddling tr… 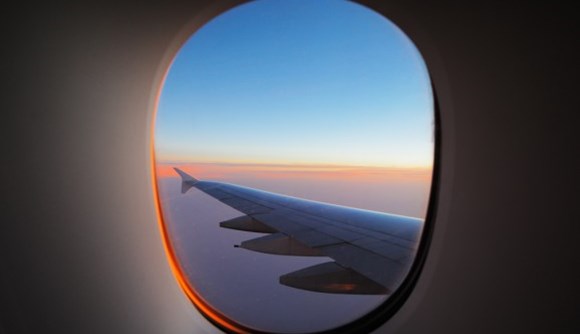 How to score cheap flights!

It’s a fact – Aussies love to travel. (Almost six million of us went OS last year). And many of us, by way of…